Figure 1 A Before/After image of the Keavy's Corner Front.

As of October 18, 2019, Stephen Pardee’s online store, Keavy’s Corner, has disappeared from the WPS Suppliers list (It later came back on the list at the beginning of November). Upon discovering this, it also appears the article on Keavy’s Corner, “The quality of MMS - Chlorine Dioxide,” erased any mentioning of the WPS Suppliers List (See Figure 2). Additionally, posts made by Stephen under the account name “Steve” have gone through an alteration in the MMS Forum by switching his avatar image (See Figure 3). Those posts mention Stephen’s affiliation and his role in the WPS Suppliers List. Additionally, as of November 9, 2019, either Stephen or a partner of Stephen created a redirection from these posts to an entirely different webpage if a user tries to log in.

Based on the notion that vital information does not abruptly vanish overnight, there is now a presumption that Stephen realizes his errors and is now trying to tamper, alter, and even destroy evidence linking him and Keavy’s Corner to the Genesis II Church of Health and Healing (G2CHH) and its current leader Mark Grenon. Since 2018, Geoboros monitors the WPS Suppliers Page on a near daily basis, including the MMS Forum, MMS News (now called G2 Church News), and even Facebook. It is worth mentioning that aside from frequently monitoring their activities, information is also archived and stored offline onto a hard drive with all other information related to G2CHH. Information includes but not limited to screen captures, jpeg/png files, pdf files, and HTML documents. When noticing these abrupt changes in October, rather than reacting, it became more beneficial to observe their actions as to how they try to cover evidence while assuring the information already discovered is safe and secure.

Although the destruction and tampering of evidence are disappointing, the positive outcome is that this further supports the theory that Stephen does have ties to Mark Grenon and G2CHH, that he is secretly and illegally selling chlorine dioxide for human consumption, and will not stop trying to sell MMS products. There is further evidence based on the investigation that Keavy’s Corner also on markets Chlorine Dioxide/MMS on eBay, Amazon, and even Walmart.

Regarding eBay and Amazon, Keavy’s Corner has been selling MMS Products since 2014 and went through the repetition of sanctions by PayPal, eBay, and Amazon for selling the product. On Amazon and eBay, there is proof and suggestions that Keavy’s Corner is still selling these products under the eBay username “nik0703” and “Humble’s Mineral Solution A Miracle,” “Miracle,” and “NChlor” under Amazon. Since monitoring their pages last year, Keavy’s Corner used the original design to sell their product. However, since the FDA’s second warning about MMS and also losing their product sales on Walmart (See Figure 4), the design changed and called it NatriChlor on eBay and Amazon (See Figures 5 & 6). Although the design changed, the element that remained is the business logo. This design only exists on Amazon and eBay and not on the Keavy’s Corner website. Presumably, Keavy’s Corner changed its design to avoid detection and hassle from reporters and authorities to continue a secretly illegitimate business. When the product was for sale at Walmart, it sold under the username KVLab, the previous name for Keavy’s Corner.

Between observations from September 2018 to February/March 2019 in “nik0703’s” sales of Keavy’s Corner Products on eBay, over 400 packages were sold and ranked #3 in the “Other Natural and Alternative Remedies” section under the name “Humble’s Mineral Solution. W HCL” (See Figures 7 & 8). With over 400 sold and each bottle sold for $44.99, they made roughly over $17,500 alone on eBay. Assuming Keavy’s Corner makes an equal amount or more through both their main website and Walmart (before being kicked off), they could be making $50,000 or more in a rough estimation. Recently the eBay page for the NatriChlor product is taken down by either eBay moderators or by "nik0703."

Figure 7 The eBay Product selling over 400 as of February 2019.
Figure 8 The eBay listed as #3 in "Other Natural & Alternative Remedies.

There is also more evidence through the Facebook account of Kathy Pardee, Stephen’s wife and co-partner in Keavy’s Corner. Kathy made a post in 2012 as a form of defense from being investigated on Facebook by citing a law during possible previous investigations against Keavy’s Corner (See Figure 9). Assuming she thought this “ruling” would work (it doesn’t), she felt it would be ok to post about selling MMS (See Figure 10). Additionally, Kathy also posted about a business plan to expand the business, and even having their child, Keavy, help with their business (See Figures 11 & 12). Presumably from Figure 12, the Pardees named their company after their child as part their lucrative business in secretly selling chlorine dioxide as medicine, including facilitating a webpage (WPS.Land) containing other illegitimate businesses to advertise a non-FDA approved product as medicine.

Regarding the rough estimation of sales, as previously mentioned, they could be making a high amount of money after observing a few of Kathy’s posts this year showcasing trips to Disney World with the kids (Epcot, Animal Kingdom, and Hollywood Studios) and reserving a cruise for 1/4/2020 (see Figure 13). Kathy also made suggestions about going on another cruise that same year and even posting about wanting excursions and spa treatments for the current reservation. 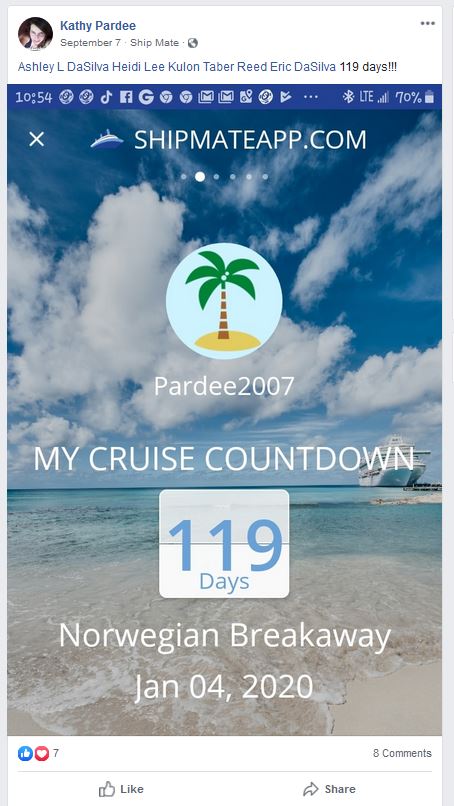 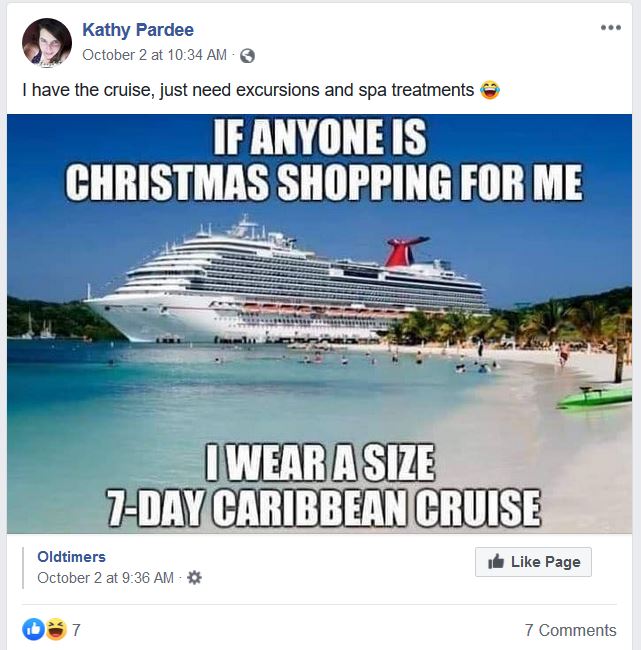 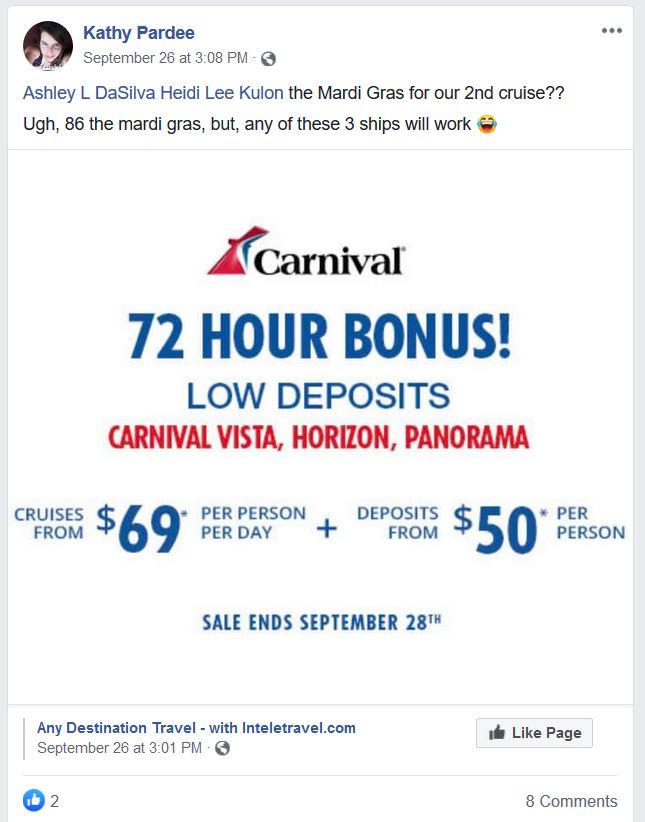 Another discovery to help back up any claims are a few of Kathy Pardee’s posts showing a photo of Stephen Pardee. Stephen Pardee in the images matches with the mugshots of the same Stephen Pardee from the Highlands County Sheriff’s Office arrest records (See Figures 14, 15, & 16). In a previous article, Stephen had many conflicts with law enforcement ranging from Civil Violations to Misdemeanors. In a couple of these conflicts, Stephen once avoided a felony conviction for the possession of Cocaine. He avoided another felony conviction in 2018 by going through a Felony Pre-Trial Intervention (PTI) Program.

There are a few things to note:

1. Online sources will not be listed any further at the moment to prevent or delay Stephen (or others) from attempting to destroy/alter any more evidence. The purpose of listing these sources is to show integrity and to provide evidence. Unfortunately, someone such as Stephen is now trying to tamper with the evidence as a way to discredit my work. Current links to online sources already tampered will stay saved on the previously published articles to show evidence theses sources at one point existed.

2. His attempts to keep his business out of light are futile as other news outlets mention Keavy’s Corner either by name or by showing their product regarding the concerns of MMS/Chlorine Dioxide. These include:

o The Houston Chronicle stated the selling of Keavy’s Corner’s MMS dated back to August of August 15 of this year. Geoboros dates their sales as far back as December 2018.

3. Even if Stephen were to stop selling through eBay, Amazon, or even his store, he could still advertise his products in secret through the help of Kerri Rivera, a major advertiser of MMS to parents of Autistic children. Kerri is already promoting Keavy’s Corner through her Telegram chat groups in reference to a screenshot in Fiona O’Leary’s investigation. Michael Harrah, Kerri’s business partner and member of the California Bar, conversed with Stephen on different occasions. Their partnership and professional skills in business and law have shaped how other businesses secretly and illegally sell MMS for human consumption.

Stephen Pardee must be apprehended at all costs as he will never stop his business and get other people hurt until the FDA finally takes action. Due to Stephen Pardee’s recent attempts of tampering with evidence, Geoboros will continue to monitor Stephen Pardee and Keavy’s Corner, including other businesses domestic and foreign. Geoboros will continue to research and discover other methods in spreading the message and exposing G2CHH’s MMS Marketing and other activities. Additionally, Geoboros will create an HTML file section for destroyed/tampered data and also develop different ways to provide evidence to avoid the destruction of the source.

Eventually, Stephen Pardee and other MMS Vendors will one day finally get caught FDA and other law enforcement officials with Federal charges. If Stephen Pardee or his wife can reduce their charges and see their children without being behind a glass wall, it would be beneficial for them to flip or otherwise ratout other vendors, including Jonathan and Jordan Grenon. Additionally, those currently and those not on the WPS Suppliers List are also affected by this. Stephen has a choice to either surrender to authorities or keep hiding evidence in vein. For Stephen in his own words “If anyone has any comments, gripes, bitches or complaints, now is the time.”